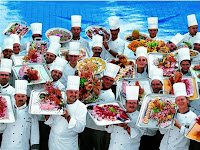 “Gordon Ramsay is one of the greatest chefs in the world and his firmament boasts fourteen Michelin stars, gathered over his dazzling 10 year career. In 1998, at the age of just 32, having given up his passion for football due to injury, Gordon Ramsay opened his first restaurant in Chelsea, London and gained his first three Michelin stars. Since then, his cooking, which blends boldness and delicacy, innovation and tradition, has travelled all over the world and, from summer 2009, will also exclusively grace the Forte Village dining table. It is a new pinnacle of taste in one of the most prestigious parts of our resort” Forte Village Resort Sardinia.
Book before 30th April 2009 and Just Sardinia can offer up to 2 free Child places (aged 0-11 years inclusive) when sharing with 2 full paying adults at Il Villaggio - Saving up to £2335.00 for a family of 4! Click here for more Special Offers.

Posted by Just Sardinia, Sicily and Corsica News at 14:37