Fancy a weekend in Sardinia watching Top Flight Football? Here at Just Sardinia our favourite football team is Cagliari in Serie A. Combine a weekend of shopping, sightseeing and a football match in the stunning city of Cagliari this winter and you will be in for a real treat!

Listed below are the home games for Cagliari this current season. Just Sardinia can offer a week end in the T Hotel in a classic room with breakfast and airport transfers from £221.50pp. Tickets for the games can be purchased in advance through Just Sardinia and will be waiting for you on your arrival at the hotel. Flights from Stansted with easyJet from £52pp .

Last year Huw and Alison owners of Just Sardinia took their3 boys and a group friends to AC Milan game in April which was really exciting. "We arrived just in time for the T Hotel Friday night cocktail party and the away team were staying at the same hotel so the boys were able to get the teams autographs and signed pictures including Ronaldinho" comments Huw.

The Stadio Sant'Elia (Cagliari stadium) was used during the 1990 world cup where England played all there group matches in the Stadium.

Getting around Cagliari is easy by bus, and a must see is the San Benedetto market, The Castello area and Poetto beach.

Posted by Just Sardinia, Sicily and Corsica News at 14:35 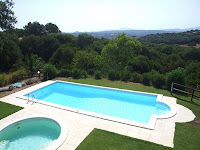 Just Sardinia have updated their villa offers for the 21st August and the 28th August with further discounts for a last minute holiday in Sardinia:

Call us now on 01202 484858 to book these great offers NOW!
Just Sardinia is a Member of ABTA with membership No. W6775. All accommodation is financially protected by ABTA .
Posted by Just Sardinia, Sicily and Corsica News at 12:48

Don't Miss Out! Leave the drizzle behind and jet off to sunny Sardinia with these great savings and great holiday ideas with Just Sardinia...

Date Accommodation Duration Was Save Now

Forte Village Il Villagio
Prices from £3031 on the 21st August for 2 adults and 2 children (aged between 2 and 11) for a Family Bungalow in the 4 star Il Villaggio saving £1515.50 (original price £4546.50) PLUS guests receive 400 Euros Per Room Per Week towards your extra's bill inc food & beverages, Spa treatments and sporting activities within the Resort.
AND for Children 4-13 Years Old Complimentary Daily Soccer School (worth 250 euro's per child per week).
(MINIMUM STAY 7 NIGHTS.)

Sardinia Beaches
With over 1800km of unspoilt coastline, Sardinia is renowned for beautiful beaches and the clearest translucent azure blue sea in the Mediterranean.
Prices from £1039pp per week at the 4 Star Hotel Villas Resort.

Luxury Sardinia
Sardinia has many beautiful locations for a luxury holiday. The Just Sardinia Luxury Collection has been created to include the very best the island has to offer.
Prices from £1425pp per week at the 5 star Villa Las Tronas Hotel and Spa.

Multicentre Tours
Tailor made tours and multicentre holidays are becoming increasingly popular for those looking for a different style of holiday and to see more of their holiday destination.
Prices from £1063 inc accommodation and hire car (excludes flights) based on travel on 4th September 2010.

Flights
Sardinia is just over a 2 hour flight from airports throughout the UK. For further information visit our travel page or call our Reservations Team on 01202 484858.

For more information or to BOOK NOW please call 01202 484858 or book online at www.justsardinia.co.uk

The above prices are based on accommodation only. Airport transfers and car hire priced separately for flexibility. Terms and Conditions apply.
Posted by Just Sardinia, Sicily and Corsica News at 15:46

JUST SARDINIA has been named by the British Travel Awards as one of the shortlisted contenders for the Best Weddings & Honeymoons Tour Operator 2010.
Sardinia is the perfect location for couples to enjoy a special romantic holiday or honeymoon. Just Sardinia will co-ordinate all your wedding arrangements in association ‘Weddings in Sardinia’ (www.weddingsinsardinia.com) and can book accommodation and advise on flights for both you and your wedding guests and a Pre Wedding Consultation to meet with your wedding planner who will help you organise the ceremony and legal documentation, reception, flowers, photographer, cake etc.
“We are able to organise the most intimate wedding that consists of just the bride and groom to a full fairytale white wedding to suit all tastes and budgets” comments Alison Nurse, Marketing Director. "All the staff at Just Sardinia have visited Sardinia many times for both educational visits and for their own holidays and honeymoons! We can give you first hand knowledge of the destination and recommend an ideal location for your all important wedding and/or honeymoon".
Just Sardinia is an independent company established in 2000 based in Christchurch, Dorset and specialise in selling tailor made and package holidays to Sardinia. Being members of ABTA W6775 and AITO Just Sardinia gives all customers financial protection for their holiday and peace of mind when booking. Just Sardinia pride themselves on in depth local knowledge of the island, the Directors having lived and worked there since 1982. Just Sardinia have personally selected a collection of hotels, villas, apartments and farm accommodation considered to be the very best that the island has to offer in idyllic locations, with excellent facilities and a choice of activities. We believe that we have a choice of holidays to suit everyone’s taste and budget and can offer any day arrival/departure and any length of stay with or without flights for total flexibility. With local representatives in Sardinia, we also offer personal assistance on holiday and an emergency telephone number.
BTA’s chief executive Lorraine Barnes Burton said: “The British Travel Awards are widely considered to be the “Oscars” of the travel industry! It’s the largest awards programme in the UK created to reward travel companies and the winning accolade is the benchmark for excellence when it comes to finding out who really is the best in the business of travel for the UK consumer.”
Companies were nominated by travel industry professionals and a selection of the previous year’s consumer voters, and the shortlisted companies now go to the consumer voting stage. In 2009 over 100,000 votes were cast with the results scrutinized and audited by Deloitte LLP. The winners of the 2010 British Travel Awards will be announced at a glittering ceremony on 4 November at the Battersea Evolution in Battersea Park, London. www.britishtravelawards.com
For further information contact: Just Sardinia 01202 484858 www.justsardinia.co.uk
For further British Travel Awards media information contact: Jane Richards 07711 101493 Jane@britishtravelawards.com
Posted by Just Sardinia, Sicily and Corsica News at 12:41